Since I'm an iKONIC, the only rappers I listen to are BOBBY and Mino? but then I was listening to Lee Hi's 1,2 and I was like 'What the, the rapper is so good' so I looked it up and turns out, it was Choi Hyunsuk

So I listened to all TREASURE songs and even in Going Crazy, he did so well in his part. I also watched his fancams and his facial expressions, as well as his gestures are so good ㅋㅋㅋ I guess I'm a helpless YG fan,,~

Personally, I really like ORANGE. The song from TMAP's opening and ending clip is also great. I watch TMAP just to listen to that song

+ Wow this entered the talk-section! Everyone please pay lots of attention to iKON in Kingdom❤ 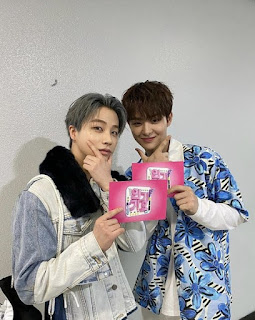 [+42, -1] This is for real.. Just by listening to his voice, you know he's from YG ㅎㅅㅎ then you look at his visual, yup definitely from YG ㅋㅋㅋㅋ His rapping and visual definitely matches YG's style

[+37, -1] I'm also a YG fan and it's so evident how Choi Hyunsuk grew up in YG just by listening to his rap. He matches YG style. You can feel the carefreeness in his rapping phase, as well as the way he pronounces word by word.

[+36, -5] Aren't Yoshi and Ruto also great like for real, Haruto's rapping reminds me of TOP and Yoshi reminds me BOBBY's high tone rap without the growling

[+14, -0] I freaking love the GD-MINO-BOBBY rap line and I really like Choi Hyunsuk and Haruto's rap in TREASURE. I even look up for their rap compilation on YouTube... All hail to YG's rap line

[+13, -0] Thank you for the kind post!!ㅜㅜ Please pay lots of attention to TREASURE's Choi Hyunsuk!!❤

[+12, -0] How should I say this. If Song Mino and Kim Jiwon are definitely on K-hiphop level of rappers, Choi Hyunsuk is definitely like the standard of idol rappers. His rap parts suits idol songs and his impressive rapping catches your attention

[+12, -0] Exactly. He's impressive and his rapping is so clean. I'm a BLINK and personally, I really like Hyunsuk's rap in COME TO ME and in ORANGEㅜ

[PANN] A post to show off TREASURE Asahi's visual

I was so surprised when I saw his visual

+) Since some of you are flipping out with the 'Miracle of Japan', I'm just gonna change the title~~~

T/N: The original title of the post was Miracle of Japan aka TREASURE Asahi

[+78, -13] He definitely looks like someone from a Ghibli movie. Fcking handsome

[+62, -10] Whenever I look at TREASURE's Japanese members, I wonder where did they find these kids ㅋㅋㅋㅋㅋㅋㅋㅋ They're also great at Korean

[+51, -5] I'm another group's fan just passing by and TREASURE has a lot of handsome membersㅋㅋ Specially Asahi and Haruto are freaking handsome, So Junghwan is also handsome. Yoon Jaehyuk's looks is heart fluttering. Kim Junkyu is cute and Choi Hyunsuk is my style.. Ah am I a teume;;

[+41, -4] Honestly, if the visual is quite vague then I won't agree but come on, anyone will say he's handsome ㅋㅋㅋㅋㅋㅋㅋ I only see jealousy in here ㅋㅋㅋㅋ

[+34, -4] Doesn't he looks like someone from a Ghibli movie,, This was when he's in middle school 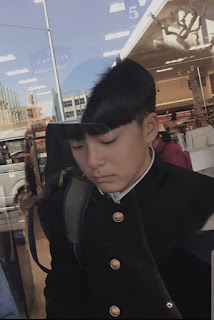 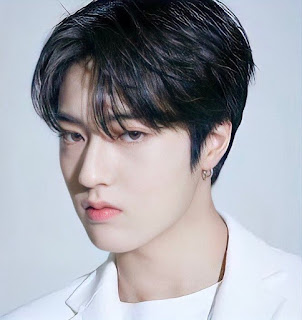 [+30, -4] As expected, everyone is keeping an eye on rookies ㅋㅋㅋㅋㅋ Sorry not sorry but he's indeed handsome so your words are irrelevantㅋㅋㅋㅋㅋㅋㅋ

[PANN] The reason why TREASURE are kind 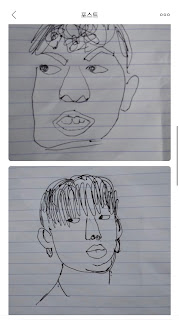 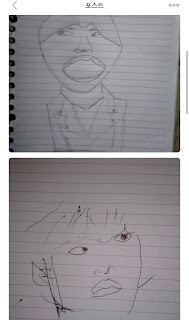 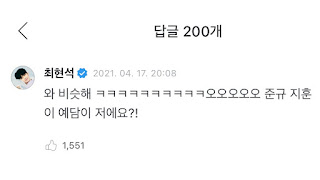 Hyunsuk: Wow looks the same ㅋㅋㅋㅋㅋㅋ Ohhh is that Junkyu, Jihoon, Yedam and me?!

Teume: I will never die until Junghwan calls me noona...
Junhwan: Huh well then unnie

[+56, -1] Park Jihoon is also so funny ㅠㅠㅠㅠㅠ What's so good about that ㅠㅠㅋㅋㅋㅋㅋㅋㅋㅋ

[+23, -0] The photo below has no damage or whatsoever so why do you keep on uploading itㅠ You'll probably giggling to yourself while uploading that photo huh? What a pity 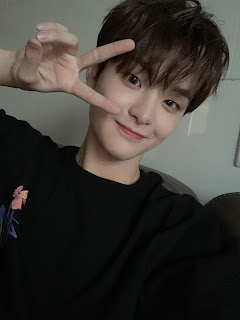 *T/N: OP is talking about that photo of Jihoon from Yedam's birthday greeting 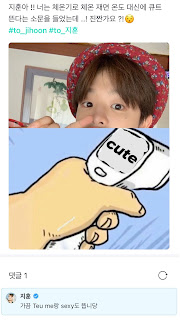 Teume: Jihoon, there's a rumor that instead of the temperature, it says 'cute' whenever you're checked with a thermometer..! Is this real?!
Jihoon: Sometimes, it says Teu me and Sexy too 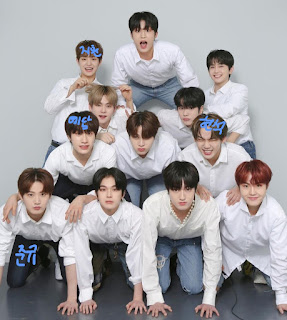 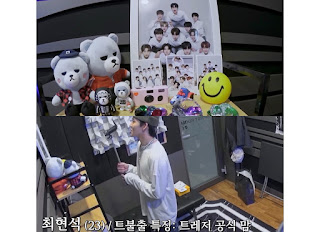 [+19, -0] So fascinating how he was able to distinguished who is whoㅋㅋ

[+16, -0] ㅋㅋㅋㅋㅋㅋ I fell for them recently after listening to their songs and the kids are so kind ㅜㅋㅋㅋㅋ 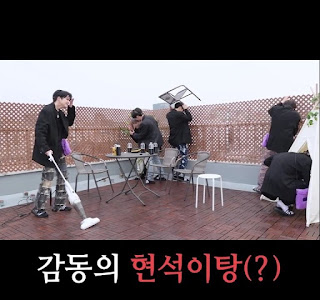 [+13, -0] Overall, this whole team have that innocent vibe but the leaders, specially, are doing so well with their own roles. Choi Hyunsuk, contrary to his image, is very sweet. He's very emphatic and takes really good care of everyone, while Jihoon has very sharp sense that he makes sure none of the members are falling behind during their interviews and he also makes the mood fun...

[PANN] Idol who tweeted the quote from a mock test

The senior highschool students had a mock test today and 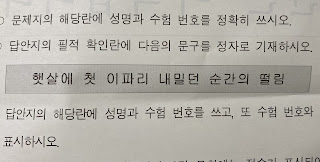 the quote for the handwriting verification was this ㅠㅋㅋㅋㅋㅋㅋㅋ 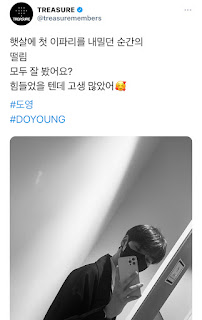 He posted it like this... Since he's usually like that, the fans just went "It's Doyoung~ ofcourse~" but turns out, it's from the mock test ㅋㅋㅋㅋㅋ So cute and funny.. 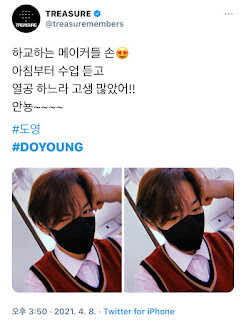 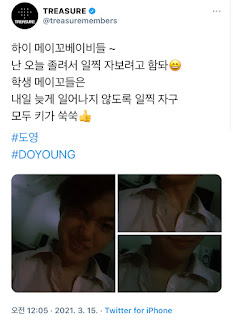 He's a student himself but he takes good care of the student fansㅠㅠㅠㅠㅠㅠ Cutie!!

Kim Doyoung, who's doing his best as a student is the best~♡ 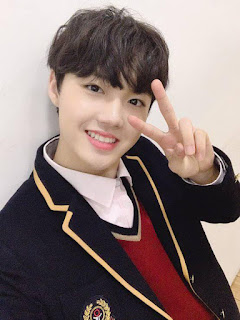 [+32, -1] I've seen him when he was only a middle schooler and now, he's now 20 years old and is in senior high.. The day Doyoung becomes an adult, someone is gonna be an emotional Teume here 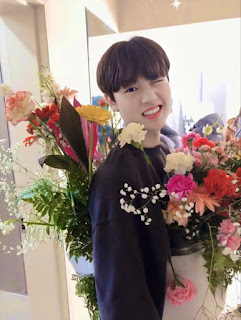 [+10, -0] I've seen him from YGTB and he looks really cute ㅋㅋ Was he a middle schooler back then? he looked really young

- He grew up so fast. For real, middle schooler Kim Doyoung feels like it's only yesterday

[PANN] Male idol who danced to Rollin after waking up

Woke up, changed to country folk clothes (He suits it for real), carried some weird chair on his hands 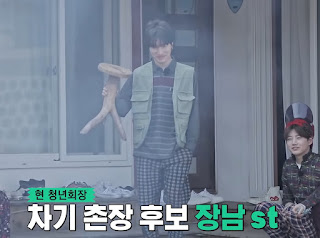 Then sexily danced a choreography (If you'll watch the actual video, he really danced sexily ㅋㅋㅋ ) 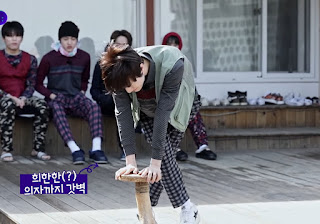 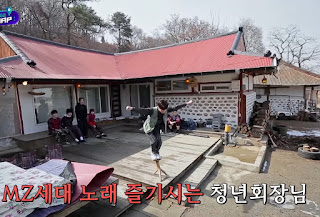 He was doing well when he suddenly disappeared from an angle 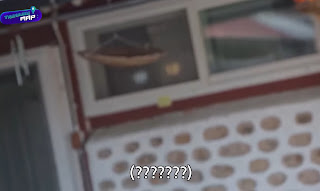 Turns out he fell ㅋㅋㅋㅋㅋㅋㅋㅋ Members running towards him 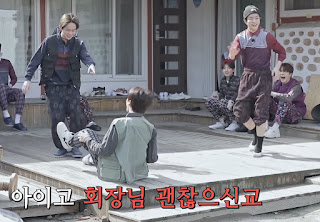 Bang Yedam is funny ㅋㅋㅋㅋㅋ TMAP is so fun, everyone please watch it!

[+21, -0] Yoon Jaehyuk who feels happy after wearing colorful clothes. Ah you should watch this with the audio though ㅋㅋㅋㅋ

[+21, -0] Am I the only one who still can't understand Yedam's personality? He seems mature but is also playful. If you'll at it well, he's always like this at the back

[+16, -0] I'm another group's fan and this is the only other idol content I keep up with ㅋㅋㅋㅋㅋㅋㅋ They're really funny fck

[+13, -0] Neighborhood hipster Jihoon cooking while looking like the cover of Vouge magazine 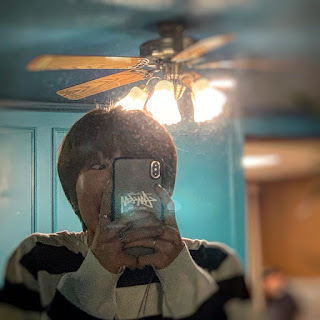