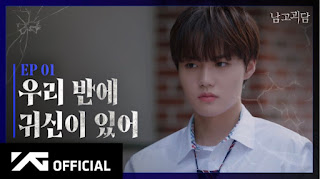 It's TREASURE's web drama 'The Mysterious Class' which started today!

It's only the first episode, but the story already seems promising

To be honest, since the kids are not actually actors, I thought there would be 'bad acting' parts

But their acting skills were better than expected

Since the web drama is a collaboration with a professional company, the quality is literally on 'drama' level ㅋㅋㅋ 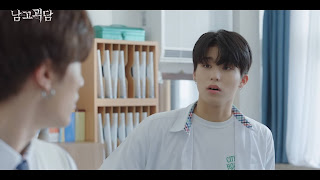 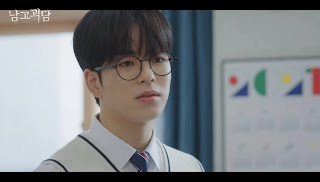 There might be some of you who have watched 'It's okay, it's friendship' and,

Their acting skills have improved so much compared from before

Since it's an actual web drama, you can expect the story to be promising

So please watch it a lot hihi

Starting today, every Friday at 10pm!!

They will also have their comeback soon, so please give them lots of attention ♡

To be honest, I was really surprised..

The company put all their passion, which was supposedly for the comeback, in here... [+49, 9] The quality was honestly so good, but it's making me frustrated. How come they can't find that one person

[+44, -0] Since it's a content (for fans) in form of web drama, I was not looking forward to their acting. ㅋㅋㅋㅋㅋㅋㅋㅋㅋ No, but what is this? My hands and feet are calm*. I'm so excited for the next episode

*means she doesn't find it cringe at all

[+18, -1] The person wearing light purple clothes acted naturally, and he looks cute. I'm browsing through every idol's contents, and now I found something to watch  ㅋㅋㅋ

[+17, -0] So they didn't just improve their singing and dancing skills during hiatus, their acting skills is amazing ㅋㅋㅋㅋㅋㅋ

[+16, -14] like/dislike) Tip for the awaited next episode! Find the members who were trying hard not to laugh

[+16, -0] I was honestly not looking forward to their acting after watching 'it's okay, it's friendship', but it was okay ㅋㅋㅋ Seems like their acting skills have improved all this time

ㄴ Very fun. Looking for the ghost is actually enjoyable. Try it.

[+14, -0] I was really surprised with the quality. The kids' acting skills were unexpectedly good. They have improved so much!!!!! A week is so long..

[+11, -1] I thought they were pushing one? two? popular members, but everyone is actually good at acting? It was so fun!

[+11, -1] Junkyu, why are you so cute ㅋㅋㅋㅋㅋ To be honest, the kids' acting have become more natural compared to before. Give me episode 2 faster!

[+10, -0] I came here after watching, and how come they're all good at acting? I'd even believe it if you'll tell me that they're actors

You can see the sasaengs behind them

1. Like a companion but is not, pushing through a large crowd

3. (Tense with the unexpected large crowd)

4. Because of the large crowd, no  t-log clips for their safety

5. For everyone's safety, suddenly picked a place they can be happy

6. At this moment, boat to watch over TREASURE has come

"They rode a boat and the sasaengs even followed them"

"The company including sasaengs in their video"

ㄴ [+21, -0] WINNER was originally a fandom idol tooㅋ That story of a sasaeng entering their recording studio is famous. WINNER thought they were a staff, so they just let them inside. Anyways, it can't be helped since they're an idol but TREASURE, in particular, has lots of sasaengs. (There's a lot of them) in front of the YG building

[+222, -0] Their original plans were cancelled and they went to a private island because of them, so seeing people on twitter even cursing at the staff was unbelievableㅋㅋ

[+51, -0] At this point, they probably want to appear (in the show). In that case, you should just release their faces in HDㅋㅋㅋㅋ

[+44, -0] Ah that's probably why some of the members doesn't want to swim and were just sitting there. At first I thought it was strange..? but after seeing this, no wonder

[+44, -0] Wow... I was already pissed off because it's TMAP last episode yet we couldn't even get proper content because of them and just ended it just like that? But they're cursing the staff? Psychopaths

[+32, -0] We have 4 minor members ㅠㅠ They went to a private island and cancelled their plans because of sasaengs, so why would they even rent a boat to chase after them.. To think that it's the last episode... Looking at the kids, they had no plans to go into the water and even go to the island

[+25, -1] I'm so freaking pissed off, the last content for season 2 just went by like thatㅡ Sasaengs shouldn't even exist because we're in pandemic but these bitches even rented a boat to chase after them in an island. They're not even 1 year old yet but seeing how it's like right now, what's gonna happen (in the future)

[+15, -0] Wow what a fucking dedication. I won't even be able to spend money to chase after my bias like that because it's so hard for me

[+14. -0] I've seen this somewhere that the kids would even greet sasaengs outside their company building.... They're just kind and innocent

[+11, -0] They're really crazy... Got goosebumps seeing them ride a boat to chase after them

[+10, -0] Sasaengs can't be persuaded by words. They're not in their right mind. They're just stalkers

[+9, -0] Wow I wonder if their parents know their children are like that.. Goosebumps, how can they even rent a boat to follow them ㅋㅋㅋㅋㅋ

It's TREASURE's web drama 'The Mysterious Class' which started today! It's only the first episode, but the story alrea...