The way Yujin said she has an idea for their nickname and went "Jini~", then she turned to Jihoon so he went "Hooni~" and Sunchan as well with "Chani~"

was so freaking funny and cute ㅋㅋㅋㅋㅋㅋㅋㅋ

I heard the MC's will perform AKMU's Give Love for welcoming ceremony. I'm so excited

[+174, -4] They way Jihoon and Sunchan immediately went with Yujin's idea was so clever and cute ㅋㅋㅋㅋㅋㅋㅋ I think I'll continue to watch Inkigayo

[+155, -2] No but when Yujin was talking about how she's the youngest by age etc., there was a moment when she suddenly paused and Jihoon and Sungchan met eyes then both of them was like 'Wooooowwww'. That was freaking cute that I've replayed it 5 times ㅋㅋㅋㅋ

[+79, -0] People said their visuals don't match and dragged them so bad but after watching their videos, I find them so cute though

[+39, -1] He's our tiny softieeee. Height: 178cm / Nickname: Strong Jihoon / Weight: 60kg. He is known to be TREASURE's Kim Jongkook / He looks like the youngest but he's the leader, a 200-liner ENTJ / His love for the fans is amazing so he's the member who comes to their official twitter everyday / Park Jihoon who might look strong outside but is soft inside... 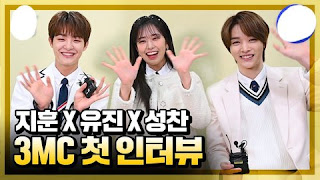